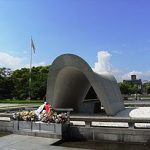 The Peace Memorial Ceremony is held annually at the Hiroshima Peace City Memorial Monument (pictured) remembering 6 August, 1945, when an American bomber dropped the world’s first atomic bomb over Hiroshima City, Japan. The entire city was devastated by the heat and shock waves of the blast, producing numerous civilian casualties.

The Ceremony is ‘to appease the souls of those killed by the atomic bomb and to pray for eternal peace on Earth’. During this ceremony, the Peace Declaration, appealing for the abolition of nuclear weapons and for the realization of eternal world peace, is delivered by the Mayor of Hiroshima City and is transmitted worldwide.

At 8:15 a.m., which is the exact time when the atomic bomb was dropped, the Peace Bell is rung and citizens, either at the ceremony, at home, or at work offer silent prayers for one minute for the repose of the souls of the atomic bomb victims and for peace. 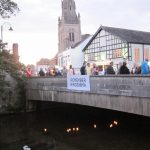 Hiroshima Day ceremonies held throughout the world, including Salisbury, to confess our complicity in this and other war atrocities and horrors.  In many places paper lanterns will bob on the waters of ponds, lakes and streams, each holding the memory of lives extinguished at Hiroshima and Nagasaki.  In Salisbury the paper lanterns sail down the River Avon under the bridge near our church. 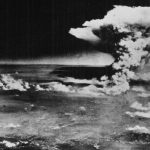 Like most traumatic scars, the ones that are found in Hiroshima and Nagasaki are permanent: reminders of the terrible damage human beings can inflict. Similar scars can be found in the hearts and souls of people around the world who understand this terror: scars of grief, sadness, fear and even shame. None of these scars promise an end to war and devastation. Instead, they serve as a reminder of healing and renewal – of a return to life.

Gracious God, Spirit of Life and Love, help us to see our scars:

those we have created, those we are called to witness, and those we can soothe and heal.

We are deeply grateful for the buds and blossoms that even the most scarred offer as a revelation to the world.

And, especially on the anniversary of Hiroshima Day,

we renew our commitment to peace individually, collectively and globally:

To “peace within” which calms our anxieties and fears,

To “peace between” which overcomes differences, animosities and conflict,

And, to “the great peace,” beyond even our understanding, that is Your gift and which we attempt to be stewards of for the world. Amen.