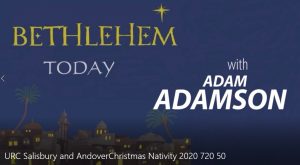 Our Junior Church found a new way of presenting their Nativity service this year.  Parents filmed the children at home acting their parts and these were cleverly edited into a longer film.  The format was a TV new broadcast, with the participants being interviewed by ‘Bethlehem Today’ reporter, Adam Adamson.  With the addition of backgrounds of scenes from Bethlehem, the finished play transported everyone to the wonderful events that took place when Jesus was born. Mary and Joseph appeared in a real stable, shepherds in fields of sheep and King Balthasar had his camel behind him!  The angels even appeared to be flying in a starry sky.

We congratulate all the children who presented such a wonderful service.