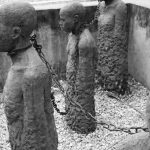 October is Black History Month throughout the United Kingdom.

The United Reformed Church is determined to explore the Legacies of Slavery and examining how the practice of slavery has continued to shape the realities of all people.

These resources for Black History Month can be found on the URC website. Click here for the links. (scroll to bottom of the page when you get there.)

The transatlantic slave trade was one of the largest forced migrations of human beings across the globe. Race-based chattel slavery, as practised in the Atlantic world, remains one of the ugliest forms of exploitation of other human beings ever invented. The legacy of that dismal history continues to impact enormously on people around the world today.

British Colonial slavery was abolished in 1833-8. British slave traders had by then transported more African people across the Atlantic than any other nation. The British government paid £16.5 billion (adjusted for inflation) to slave-owners as compensation for the loss of their “property”. The enslaved received nothing. The loan raised by the British Government to make the compensation payments was finally paid off in 2015.

We are called by our God to act justly, walk humbly and to love mercy. But true grace is never cheap. The Council for World Mission (CWM) has acknowledged that its origins, as the London Missionary Society, lie in this vital period of colonisation and slavery. Its antecedent denominations and churches were deeply complicit in this injustice. The legacies of their actions remain with us today. CWM has therefore embarked on a Legacies of Slavery Project with its partner denominations, including the United Reformed Church.

Together, we are examining how the practice of slavery has continued to shape the realities of all people.