The 2021 Prayer Handbook, Conversations, edited by Karen Campbell and Ian Fosten, is now available from the URC Bookshop. 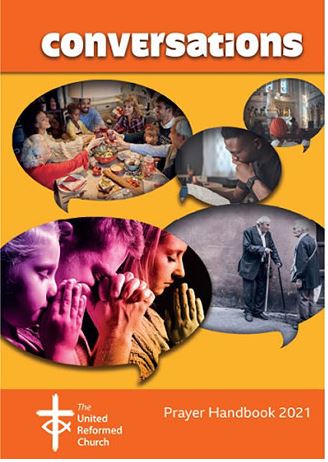 This year, the prayer handbook includes new sets of prayers in addition to the usual prayers that follow the weekly lectionary readings.

“Someone was once described as, ‘only ever on broadcast, never on receive’. That expression might describe how we often experience prayer. Prayers – particularly in church services – are spoken, offered, ‘broadcast’, often without a response being sought (or expected!).

“We are certain, however, that prayer is meant to be rather more interactive than this – ‘conversational’, you might say; us speaking with God, God speaking with us. In making this assertion, we in no way wish to reduce Almighty God to the status of being merely a cosy chum, rather we are seeking to express the deep truth that God, who is made known in Jesus, invites us into an active relationship. That relationship, like any other, is discovered and deepened when it is enriched through honest giving and receiving, speaking and listening.

“In seeking prayers for this book, we were keen to find pieces that reflected the writers’ conversational encounters with God – sometimes using familiar style and language, at other times speaking less conventionally and more adventurously – always speaking from the heart.

“This year’s Prayer Handbook comes in two sections. The first follows the pattern of linking a prayer to one or more of the set lectionary readings for particular days throughout the year.

“For the second section, we invited contributions which arose out of the writers’ personal experiences of conversing with God – the everyday and extraordinary situations in which they are moved to say ‘Sorry!’, ‘Help!’, ‘Thank You!’; the issues which give rise to deep reflection, or move them to consider their response to God’s voice as heard through the scriptures and the world.

“We hope you find the prayers both helpful and inspiring. As you engage with the material offered here, may you be encouraged to allow your own prayers to become the conversational soundtrack of your everyday life.”